8th April 2016: rehearsal of ‘Somebody To Love’ at Karlstad Sweden. Stefan is using the Treble Booster Deluxe and Mayday overdrive pedal with a Vox AC30.

Hi Greg: here is my rig:

into these pedals and Vox AC30 reissue 1990s 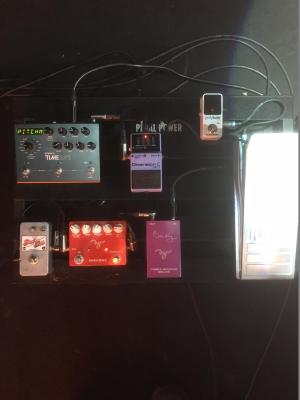 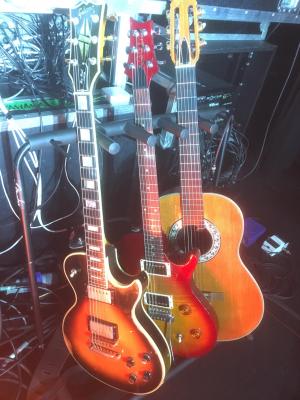 Marco Giuseppe Di Marco from Rome, Italy very kindly produced in 2015 some videos using one of the original Mayday prototype pedals which I made in early 2015:

“G’day Greg, I just wanted to share this little 15 second clip, playing the solo from Save Me. (I am grinning from ear to ear). Your products are top notch and I couldn’t be happier! Regards, Jason”

‘Hey Greg! How r u? Yesterday I played on the tour again, and I played through an Ac30, the Mayday and the TB Touring… And finally I tasted that flavour using the AC30… I really loved the sound.

Only using the normal channel.. And the sound was really big..

That legendary Brian May sound is there! With that combination! I really loved the sound!!

The place was full.. And the sound was really great too!’

Danny’s comments: ‘Hey Greg look at this, I used the Mayday through a Roland Jazz Chorus amp and the sound was great! The place was sold out, the artist that I played with, Camilo Sesto, is the son of a very famous Spanish artist. The Mayday and Treble Booster Touring gave me more gain that I expected with the Roland amp, but it was easier to control than with the Fender Twin Reverb – that is a hard amp to control I didn’t like it. But the Roland is very AC30-like with these pedals and I liked the sound very much. And thanks, amazing pedals its a real pleasure to play with them, the managers and the team of the Artist loved the sound. and I have more tour dates end of this year and next year so I will have more videos for you.’

‘Ive Got A Feeling’ The Beatles:

‘Hey Greg, take a listen to this! This clip is part of the experiments I made today! Hahaha Big sound at low levels!’

Danny said that he will do some more soundfiles soon after he does the ‘LED removal mod’ to his Pathfinder which he expects will make the Pathfinder sound a little more AC30-like. 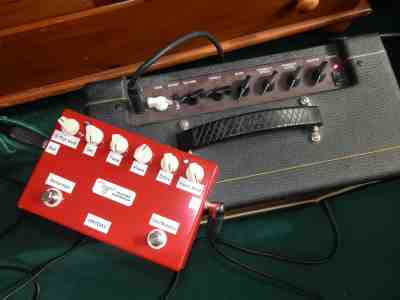 Mark recommends that to reduce overall volume level to a whisper using the TB Super>Mayday>Pathfinder combination and keep the rich distorted rock sound, it is necessary to do the opposite to when using a Vox AC30:

Hi Greg,
I have been enjoying your Mayday pedal very much.
I had tried the old Mayhem pedal many years back, which was a great pedal…and also had a neat Deacy setting, so this new pedal was quite interesting to try out to hear what the differences might be.

I use Marshall PB100 power brake attenuators with my AC30s. Although the PB100 is a fantastic attenuator (in my opinion) for gigging when it is set at 50% or more….but for playing on the lowest settings is not so good.
At those levels the PB100 is kind of fizzy and lacks a lot of character. It’s been OK to use but I have preferred to use a Pathfinder 15 with a treble booster rather than suffer the “unsavoury” sound of the lowest setting of the PB100 just to prevent the neighbours complaining!

So, it was a delight to try the Mayday and find that I can get a fantastic BM AC30 sound at very low volumes with your new Mayday and a treble booster.
I know this is a prototype but it works great!
You gave me some general settings to try but I tweaked them a little more to suit my ears.

So, how did this pedal work for me?

Superb! I used a Fryer Deluxe with the Mayday and with some tweaking, came up with what I felt was a perfect practice level tone for me.
The interesting thing was I was expecting the amp to sound a little fizzy and slightly distorted when I rolled the guitar volume off for that clean sparkly tone. I was very pleasantly surprised that it was a very clean tone and very bell like. No break up or distortion of any kind. A big plus!

The only difference I found between running my AC30s at full was that when I wanted a crunchy rhythm sound like the “Tie Your Mother Down” riff, I had to set the guitar volume a little higher. Normally I would be setting my volume control at about 1/3 of a turn for this tone but it was a little higher but below half. The full volume AC30 tends to drive itself with the sheer power so obviously a little more output from the guitar volume would help this low volume setting.
Anyway, I was able to achieve a great “TYMD” riff sound, even with that back pick twang……..great! No real complaints with this.
By altering the guitar volume either side of this crunchy setting I could easily get either that slightly crunchy clean edge (“Put Out The Fire” guitar intro) or a slightly more distorted and fuller rhythm tone (“I Want It All”)

The full guitar volume really lifts the guitar that stage further running over into that creamy saturation. I was able to get feedback sounds very easily. Basically I played around with the input level and the drive until it was giving me close to what I expect at full AC30 volume.
The very interesting thing for me was that the 1/4 turn volume setting of the AC30 I was using might still be a little too loud for general home practice….but…….by lowering the output level of the pedal you can reduce it to virtually nothing and still get that full blown tone…..and the feedback!
So even a flea would not be deafened!

The out of phase tone (neck and middle out of phase) seemed virtually unaffected by the settings of the Mayday that I had settled on. I was able to get that splutter and screech without it sounding square wave. More natural. I could always dial in a little treble on the amplifier if I feel the need to brighten it further.

Overall…..I am more inclined to use the Mayday instead of my Pathfinder for a great AC30 tone. I would imagine the pedal has enough versatility for any of the AC30 variants……and this will certainly be appealing to the Brian May fans. Every amp will be slightly different to mine and so it is a balance between the pedal settings and the amp settings to find the sweet spot.

The Deacy setting…….
This was interesting. I was wondering about how this might work as the AC30 is naturally quite deep sounding and using your initial suggested settings, I tweaked those settings a little more.
I was happy with what I was hearing. I added a little more drive to get the longer notes but I do know Brian uses his fingers more for this and not so much the amp. Even so, that is one technique which we all don’t have!
I think I can get even closer to the Deacy sounds with some more study of the pedal and further experimentation. I would like to get a little more of an edge to the notes but I was happy with the recording. I’ll get back to you once I have settled on, what I think feels right for me.

Compared to the Mayhem, this is a big leap forward. The AC30 sounds are far more refined and the Deacy option has improved too. I think that by the time I am used to the different settings and even the odd teak on the amp EQ I can get the Deacy setting even closer.

I have created some sound files for you and supplied you with a link to those. They were recorded with an SM57 through Protools. All recordings are as they were recorded. There has been no alterations, just saved as WAV files and uploaded to Soundcloud. The gear I used was the KZ Pro, Fryer Deluxe treble booster, Mayday pedal and AC30TBX Re-issue (Tan) with UK Celestion blue speakers.

I must apologise, but my AC30 developed a background hum sound during the recordings. This has nothing to do with your pedal, it is purely an amp issue but it doesn’t affect the tones I hear in the recordings.

I hope you enjoy them. 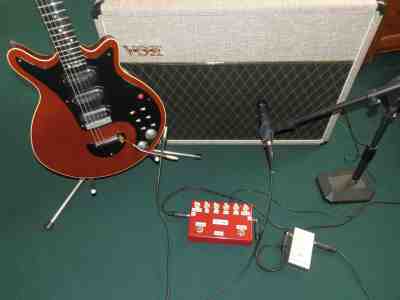