The Mayday overdrive/distortion pedal has been designed to give the full volume overdriven Vox AC30 Brian May sound but at much lower overall volume levels. It is especially good for achieving the full volume harmonically rich sound at low practice levels or rehearsal levels.

The Mayday needs a treble booster first in line to drive it, and has been designed to suit  the Fryer Treble Boosters: Touring, Super, Deluxe, Plus and Special.

The Mayday also sounds very good when used with other manufacturers treble boosters such as those made by Pete Cornish or KAT.

The Mayday has been designed for amps such as Vox AC30, Vox AC15, Vox Pathfinder, and will also sound good used with amps such as Roland, Fender and Marshall etc. 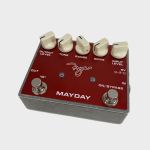 *** For people ordering from Japan, can you please order from the Kz Guitar Works official store webpage: https://kzguitarworks.stores.jp/

All the best, Greg

Mayday pcb ‘secret message’ from the great George Harrison, his last message to the world and so easy to forget in our busy lives. For a long time I have wanted to have George’s beautiful message on one of my products in some small way…. so here it is ♥

Suggested settings are pictured below for using the Mayday pedal plugged into the normal channel of the Vox AC30 with the AC30 volume control set low at approx 1/4:

On newer AC30s made after 2004 set up the amp for a loud clean sound. Master Volume control is set at full, then reduce the channel volume control to approx 1/4 or less to suit your overall volume requirements. Then control things from the Mayday pedal output level control and adjust pedal controls to suit the tonality and drive/distortion that you want.

The Range control is a 4 position rotary switch which increases bottom end as you turn it clockwise, adjust to suit your guitar and amp’s tones.

Treble Booster Super is pictured above driving the Mayday pedal. This is a great sounding combination but any good treble booster used first in line will sound good with the Mayday overdrive/distortion pedal. Adjust the Mayday input level control to suit the signal strength of the treble booster and your own personal tastes.

Mayday input level control will usually be set between 3 o’ clock and full.

After I was asked by some guitarists in 2014 about making a replacement for the older Mayhem distortion pedal, I began looking at this no 2 circuit again and in 2015 did some revisions which have resulted in the current Mayday pedal.

The original Mayhem pedal 2000-2008 used germanium and silicone semiconductors and was designed mainly for home use and for lower volume band use. Its role was to provide the full volume overdriven AC30 Brian May sound but at lower volume levels using the Vox AC30 amp.

Many people choose to run the AC30 at full volume like Brian May and use an attenuator to get the overdriven BM sound at lower volume levels. This can give some very good sounds but is hard on the EL84 valves and circuitry and sometimes results in amp failure due to the amp being run flat out all the time. Even at very quiet home practice levels the new Mayday pedal gives exciting rich full volume BM style sounds.

The original 2000-2008 Mayhem was designed to be best used when plugged into the AC30 Normal channel and the volume control set to 1/3 or less. There were many other amp types that it didn’t suit at all.

The new 2015 Mayday is also designed for use with the AC30 Normal channel, but the  flexibility of its controls and circuit makes it equally useful when used with other amp types.

What guitars does the Mayday suit?:

The pedal has been designed for use primarily with the Brian May Red Special guitar, but  sounds equally good with Gibson Les Pauls or any guitar with a Gibson style humbucking pickup.

How is the Mayday pedal powered?:

I really love the sound of this new pedal, and hope that you will be as enthusiastic about it as I am! 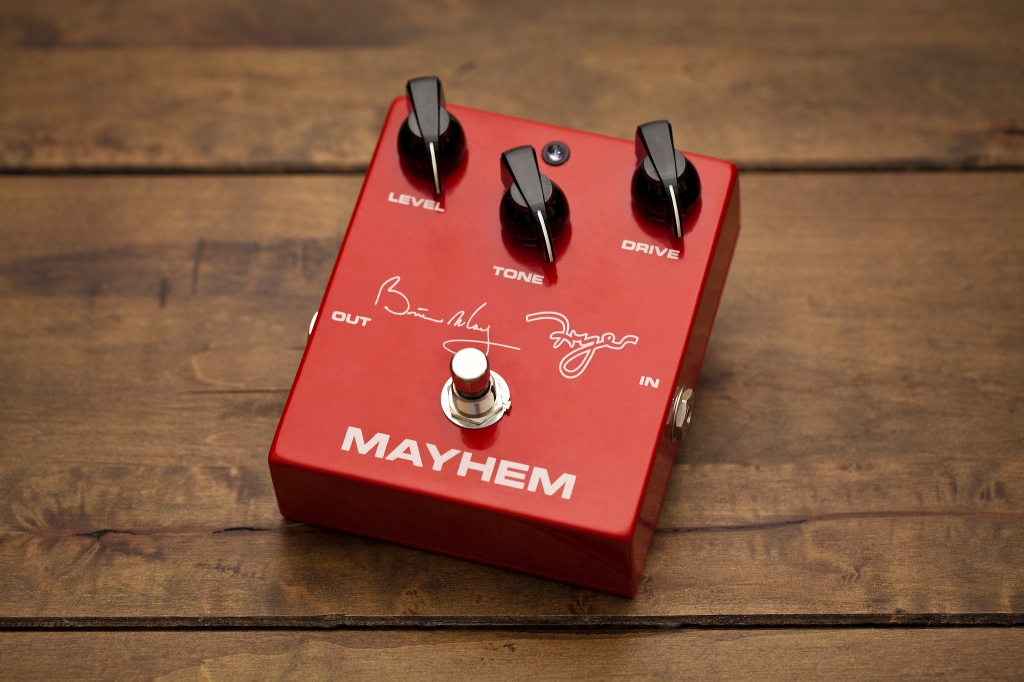